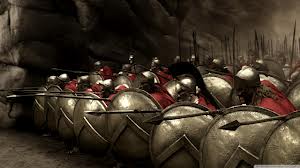 The movie “300” was released in theaters on March 9, 2007 and it is based on the epic Battle of Thermopylae where Spartan King Leonidas and 300 of his men met the massive army of Emperor Xerxes of Persia, who intended to add Greece to his empire.

ABOUT THE STORY: An emperor amasses an army of hundreds of thousands, drawn from two continents, to invade a third continent and conquer a tiny, divided nation. Only a few hundred warriors stand against them. Yet the tiny nation is saved. It sounds like the plot of a preposterous fantasy novel. It is historical fact. In 481-480 B.C., King Xerxes of Persia raised forces in Asia and Africa and invaded Greece with an army so huge that it “drank rivers dry.” Then they entered the mountain pass of Thermopylae and encountered 300 determined soldiers from Sparta. The Battle of Thermopylae ranks as one of the ancient world’s most important events, where Spartan King Leonidas and his 300-man bodyguard met the massive army of Emperor Xerxes of Persia, who intended to add Greece to his empire. To no one’s surprise, the Spartans were destroyed. While the battle bought the Greeks enough time to defeat the mighty Persians, it was more important for the metaphor it created: occasionally one has to lose to win. The movie “300” is an absolutely stunning recounting of the heroism of the ancient Spartans as they stood and fell before the might of the largest armed force on the planet. Fans of Xenophon and Thucydides will instantly recognize the ancient Greece depicted herein; the furious discipline of the bristling phalanx, the oppressive heat of the campaign, the rhythmic thud of the marching battalions. Leonidas gleams like the hero-kings of old always do in our imagination, noble and cruel. This simple tale of how one man refused to allow the glory of Greece to fade before a barbarous horde is punctuated by breathtaking battle scenes, glorious heroism, and treachery.

JOIN OUR GROUP OF FANS OF THE MOVIE “300”, THE GREEK CLASSICS AND THE GLORIOUS ANCIENT HISTORY OF ATHENS, SPARTA AND MACEDONIA. FOR ADDITIONAL INFORMATION PLEASE E-MAIL TO:

The phrase “300 Spartans” evokes not only the ancient battle of Thermopylae, but also the larger idea of fighting for freedom against all odds – a notion subsequently to be enshrined through some 2500 years of Western civilization. Even today we remember the power of the Spartans’ defiance. “Come and take them,” they tell the Persian emissaries who demand their arms. “Then we will fight in the shade,” the Spartans boast when warned that the horde of Persian arrows will soon blot out the very sunlight. “Go tell the Spartans that here we lie obedient to their commands” the tombstone of their dead reads.

In 480, an enormous force of more than a quarter-million Persians under their King Xerxes invaded Greece, both to enslave the free city-states, and to avenge the Persian defeat a decade earlier at Marathon. The huge force of ships and soldiers proved unstoppable on its way west and southward until it reached the narrow pass at Thermopylae (“The Warm Gates”) in northern Greece. There a collection of 7,000 Greeks had blocked the way. They hoped to stop Xerxes’ horde outright – or at least allow enough time for their fellow countrymen to their rear to mobilize a sufficient defense of the homeland. Among the many Greek contingents was a special elite force of 300 Spartans under their King Leonidas – a spearhead that offered the other Greeks at Thermopylae some promise that they could still bar the advance of the vastly superior invader. And that hope proved real for two days of hard fighting. The vastly outnumbered, but heavily-armed Greek infantrymen in their phalanx – taking advantage of the narrow terrain and their massed tactics – savagely beat back wave after wave of advancing Persian foot soldiers and cavalry. But on the third day of battle, Leonidas’s Greeks were betrayed by a local shepherd Ephialtes, who showed the Persians an alternate route over the mountains that led to the rear of the Greek position. When he realized that he was nearly surrounded, Leonidas nevertheless made a critical decision to stay and fight, while ordering most of the other various allies to flee the encirclement to organize the growing Greek resistance to the south.

Meanwhile the King and his doomed 300 Spartans, together with other small groups of surrounded Thespians and Thebans, would indeed battle to buy the Greeks time. They ranged further out from the pass on this third and last day of battle – at first with spears and swords, finally with teeth and nails – killing scores more of Persians. The last few Spartan survivors were buried under a sea of Persian arrows. The body of Leonidas was found among the corpses, his head soon impaled on a stick as a macabre reminder of the wages of resistance to the Great King of Persia. The Greeks took encouragement from the unprecedented sacrifice of a Spartan King and his royal guard on their behalf. And so a few weeks later at the sea battle of Salamis near Athens – and then again the next year at the great infantry collision on the plains of Plataea – the Greeks defeated, and eventually destroyed, the Persian invaders. The rallying cry of the victors was Thermopylae, the noble sacrifice of the final stand of the outnumbered Greeks, and especially the courage of the fallen Three Hundred Spartans under King Leonidas.

So almost immediately, contemporary Greeks saw Thermopylae as a critical moral and culture lesson. In universal terms, a small, free people had willingly outfought huge numbers of imperial subjects who advanced under the lash. More specifically, the Western idea that soldiers themselves decide where, how, and against whom they will fight was contrasted against the Eastern notion of despotism and monarchy — freedom proving the stronger idea as the more courageous fighting of the Greeks at Thermopylae, and their later victories at Salamis and Plataea attested. Greek writers and poets such as Simonides and Herodotus were fascinated by the Greek sacrifice against Xerxes, and especially the heroism of Leonidas and his men. And subsequently throughout Western literature poets as diverse as Lord Byron and A.E. Houseman have likewise paid homage to the Spartan last stand — and this universal idea of Western soldiers willing to die as free men rather than to submit to tyranny. Steven Pressfield’s novel Gates of Fire and the earlier Hollywood movie The 300 Spartans both were based on the Greek defense of the pass at Thermopylae.

Recently, a variety of Hollywood films — from Troy to Alexander the Great — has treated a variety of themes from classical Greek literature and theater. But 300 is unique, a sui generis in both spirit and methodology. The script is not an attempt in typical Hollywood fashion to recreate the past as a costume drama. Instead it is based on Frank Miller’s (of Sin City fame) comic book graphics and captions. Miller’s illustrated novelette of the battle adapts themes loosely from the well-known story of the Greek defense, but with deference made to the tastes of contemporary popular culture. So the film is indeed inspired by the comic book; and in some sense its muscular warriors, virtual reality sets, and computer-generated landscapes recall the look and feel of Robert Rodriquez’s screen version of Sin City. Yet the collaboration of Director Zack Snyder and screenwriters Kurt Johnstad and Michael Gordon is much more of a hybrid, since the script, dialogue, cinematography, and acting all recall scenes of the battle right from Herodotus’s account.

300, of course, makes plenty of allowance for popular tastes, changing and expanding the story to meet the protocols of the comic book genre. The film was not shot on location outdoors, but in a studio using the so-called “digital backlot” technique of sometimes placing the actors against blue screens. The resulting realism is not that of the sun-soaked cliffs above the blue Aegean — Thermopylae remains spectacularly beautiful today — but of the eerie etchings of the comic book. The Spartans fight bare-chested without armor, in the “heroic nude” manner that ancient Greek vase-painters portrayed Greek hoplites, their muscles bulging as if they were contemporary comic book action heroes. Again, following the Miller comic, artistic license is made with the original story — the traitor Ephialtes is as deformed in body as he is in character; King Xerxes is not bearded and perched on a distant throne, but bald, huge, perhaps sexually ambiguous, and often right on the battlefield. The Persians bring with them exotic beasts like a rhinoceros and elephant, and the leader of the Immortals fights Leonidas in a duel (which the Greeks knew as monomachia). Shields are metal rather than wood with bronze veneers, and swords sometimes look futuristic rather than ancient.

Again, purists must remember that 300 seeks to bring a comic book, not Herodotus, to the screen. Yet, despite the need to adhere to the conventions of Frank Miller’s graphics and plot – every bit as formalized as the protocols of classical Athenian drama or Japanese Kabuki theater – the main story from our ancient Greek historians is still there: Leonidas, against domestic opposition, insists on sending an immediate advance party northward on a suicide mission to rouse the Greeks and allow them time to unite a defense. Once at Thermopylae, he adopts the defenses to the narrow pass between high cliffs and the sea far below. The Greeks fight both en masse in the phalanx and at times range beyond as solo warriors. They are finally betrayed by Ephialtes, forcing Leonidas to dismiss his allies and leaving his own 300 to the fate of dying under a sea of arrows. But most importantly, 300 preserves the spirit of the Thermopylae story. The Spartans, quoting lines known from Herodotus and themes from the lyric poets, profess unswerving loyalty to a free Greece. They will never kow-tow to the Persians, preferring to die on their feet than live on their knees.

If critics think that 300 reduces and simplifies the meaning of Thermopylae into freedom versus tyranny, they should reread carefully ancient accounts and then blame Herodotus, Plutarch, and Diodorus, who long ago boasted that Greek freedom was on trial against Persian autocracy, free men in superior fashion dying for their liberty, their enslaved enemies being whipped to enslave others.

“Tell the Spartans stranger passing by, that here, obedient to their laws we lie”.
-the 300 Spartans message, engraved on a stone the evening before their last battle.